Noddy Holder has been chatting about those X Factor scamps once again, this time to AOL’s Spinner Music site. He has even gone so far as to say “If ‘Merry Christmas Everybody’ beats the ‘X-Factor’ winner to number one, I will stand on top of Broadcasting House and get my c— out for all the world to see.” Now that would be something. Check out the story here. 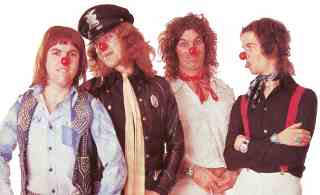 Converge continue their saturation of alternative music media with an ecellent 3 page feature in this month’s Rock Sound and 2 glorious pages in the latest issue of Terrorizer. To top it all off, Vice have given the band’s album ‘Axe To Fall’ full marks (10 out of 10). They quite rightly point out “there is no one marrying intelligent and aggressive music to such effect” as Converge do.

Noddy Holder of Slade fame has made his thoughts on X Factor and its detrimental effect on the Christmas charts very clear to The Sun in a piece which featured online here and in the paper’s Bizarre column.

Talking with Bowling for Soup singer Jaret Reddick, you may not immediately get the sense that this affable, down-to-earth Texan fronts a Grammy- and Emmy-nominated pop/punk band with over a million album sales to their credit. If you compare our first album to our tenth one, you could be like, Lets see Well, their voices finally changed, and they got a lot better musically, but they still sound like the same guys to me, Reddick says, the grin audible in his North Texas drawl. Man, I would hope were still the same guys! Can you imagine what a bummer itd be if we werent?

Weve created our niche, and our niche is us, says Reddick, who formed Bowling for Soup in 1994 and today rounds out the Denton, Texas-based quartet with guitarist Chris Burney, bassist Erik Chandler and drummer Gary Wiseman. We know there are lots of people out there who think guys in their 30s shouldnt be writing about stuff like their Wena and farts and beers and chicks. (Incidentally, youll find all of the above on Sorry for Partyin.) But I say why not? What should guys in their 30s be writing about? The economy? War? Organic food versus non-organic? We like funny movies, and we like to drink beer and talk smack about each others moms. Theres nothing contrived about itthis is who we are.

For anyone else who thinks humor doesnt belong in music, lets also remember that this is who BFS are: A worldwide phenomenon with a string of hit singles (including 2006s High School Never Ends and the 2004 MTV and radio smash 1985) to their credit. A fan-favorite live act whose chemistry is so innate theyve never had to prepare a set list. And a TV- and movie-soundtrack juggernaut whose Emmy-nominated contribution to Disneys Phineas and Ferb is literally the most widely heard cartoon theme song on the planet. Quite a step up from the salad days when they were handing out demos in Warped Tour parking lotseven if the motives behind the music have stayed the same since then.

Considering how long theyve been a band, its no small wonder that Bowling for Soup still find new ways to go for it in the niche theyve carved out for themselves. But as Reddick notes, that sense of abandon is just the thing thats allowed BFS to tackle ‘Sorry for Partyin’ as if it were their first record, not their 10th. Weve always said that the day its not fun anymore, were just not gonna do it anymore, he concludes. So why focus on the down side? Lets keep doing what we do best. Lets keep having fun.

The band have toured tirelessly throughout their career playing a total of over 3,000 shows so far and sharing the stage with the likes of Avril Lavigne, Kiss, Aerosmith, Blink 182, Good Charlotte, Linkin Park, Black Sabbath, Metallica and even Britney Spears!

Broadway Calls are influenced as much by classic punk acts like the Ramones and the Buzzcocks as they are by more modern acts such as Jawbreaker and Green Day. Weve always written songs that we wanted to hear, and thats definitely true with Good Views, Bad News.

Since forming in the unlikely locale of Rainier, Oregon, four years ago this trio of childhood friends  which also includes bassist Matt Koenig and drummer Josh Baird  have been touring constantly, and fine-tuning their unique blend of melodic pop-punk. Vaughn and Baird actually met back in sixth grade.

Originally signed by Green Days Billie Joe Armstrong, Oregons Broadway Calls released their second album on 17th August 2009 on Side One Dummy Records. Division has forged a relationship with the label through working with The Gaslight Anthem and we are honored to work with their labelmates Broadway Calls. The band’s album Good Views, Bad News was recorded in the famed studio Blasting Room in Fort Collins, Colorado, with Descendents and Black Flag drummer and production guru Bill Stevenson. The coverage we received for the band over the course of the album campaign included a MySpace video premiere, Punktastic webchat, ITN video interview at Reading festival, Kerrang! podcast, The Fly live review, Chasing Safety Guerilla Session and over 35 album reviews.

Flood Of Red formed in Airdrie, a satellite town twelve miles east of Glasgow in 2004. Starting out as a trio who met via school and the local skate scene, they soon expanded to a sextet. The band went straight out on tour just months after their formation, all aged just seventeen. Fast-forward to January 2nd 2009 when Flood Of Red flew to Baltimore, Maryland where they spent a month recording their debut album with punk rock extraordinaire producer Brian McTernan  (Cave In, Thrice, Converge) in his Salad Days studio. Having been so far on their journey up to this point, Flood Of Red are now more than ready to share their lovingly crafted debut full-length ‘Leaving Everything Behind’ with the world as they continue to tour tirelessly in support of the record.

Volcom Entertainment and Flip Skateboards enlisted Division’s assistance in gaining press on the first skate video soundtrack of its kind. Flip’s ‘Extremely Sorry’ DVD is accompanied by a completely original soundtrack, put together by Producer Baron, Flip co-owner Geoff Rowley and the other skaters featured in the DVD, along with a little help from the likes of Lemmy from Motorhead, Dave Lombardo of Slayer fame and even Snoop Dogg and Warren G.

Elliot Minor‘s ‘Solaris’ album was recorded in April of 2009 at Chapel Studios in Lincoln and at Mavehole Studios in York.  Produced once again by Jim Wirt (Incubus, Hoobastank, Something Corporate) and mixed by the multi Grammy award winning Tom Lord-Alge (Manic Street Preachers, Taking Back Sunday, Weezer, The Rolling Stones), this second collaboration meant that the band and Jim knew what had worked before but gave them a lot of room to add new creative ideas and to push into bold new territory.

The pop-rock outfit explore new areas of the genre with heavy influence from orchestral and choral music. The band has a rabid fanbase and they have toured extensively yet tirelessly with the likes of Simple Plan, Fall Out Boy, McFly and You Me At Six to help build upon these foundations.

Our newest exciting addition to the roster for 2010 are Portland quintet Musee Mecanique. Their press campaign has just kicked off with a “New Band of The Day” feature on The Guardian Online. Click HERE to see it.