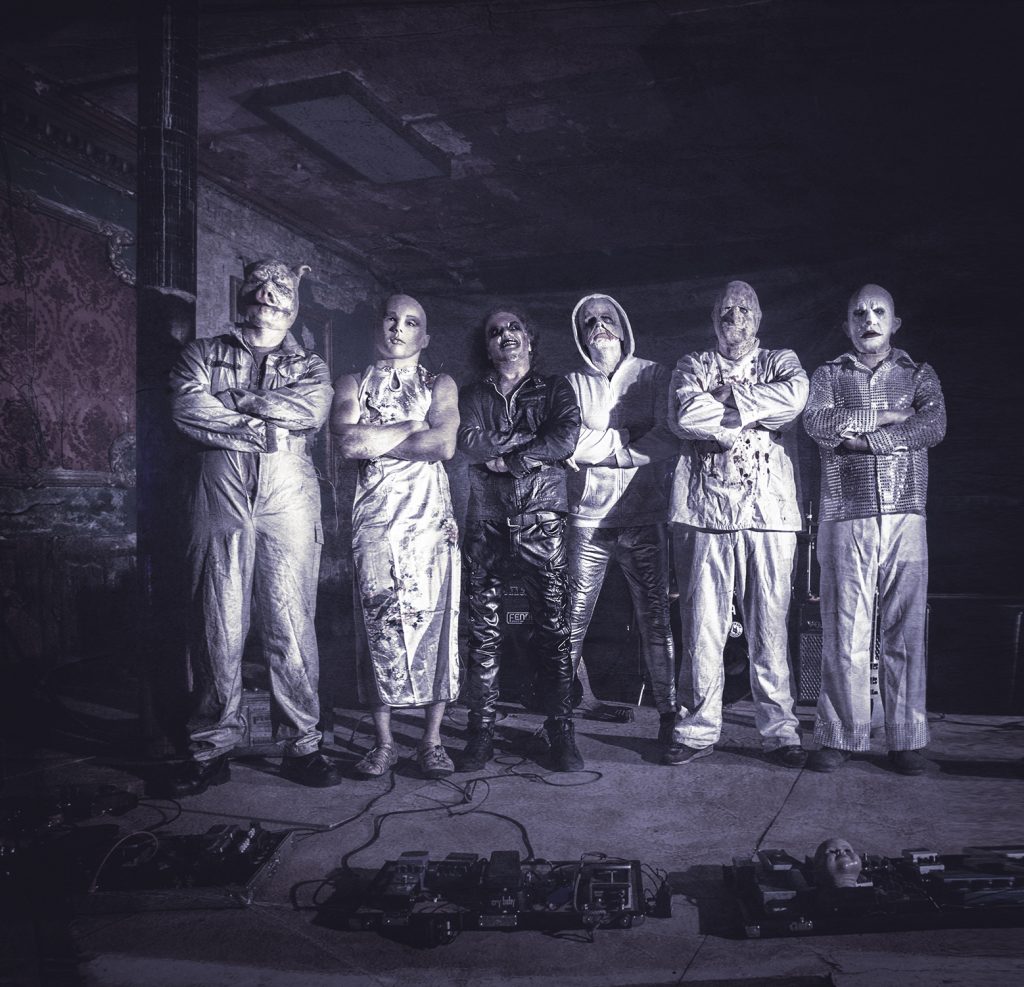 When Evil Blizzard emerged from the bowels of Lancashire with their debut album 5 years ago it is fair to say they caused a stir. Put on the front cover of The Guardian, championed by Mark E Smith (who gave the band the money to record their debut album out of his own pocket) their gruesome mix of four bass players blending Psyche, Krautrock, Post Punk and an unmistakable image saw them launched onto magazines and websites worldwide.

But it is only with the release of their new, third, album ‘THE WORST SHOW ON EARTH’ (on their own newly-founded Crackedankles Records, released 29/06/18) that the band have finally fulfilled their potential.

Heavy, grinding and yet commercially viable, this new album sees the band truly shake off the ‘gimmick’ tag of the past and stride forward into new musical dimensions. Yes; there’s still 4 basses. But also, piano, cello, samples and a general disregard for the basic concept of a ‘pop song’ with 2 tracks hitting the 10-minute mark.

The introduction of keyboards into their live onslaught (you have seen them live, right? Right?!?) has developed their sound to incorporate techno and industrial elements, with recent single ‘Fast Forward Rewind’ hitting the nation’s airwaves aided by its freak show video shot illegally in an abandoned Victorian Music Hall. Forthcoming single ‘Unleash The Misery’ (released September 18) sees the band channel their inner Glam Rock. The cataclysmic title track features the spoken word of German artist Arne Wald, with whom the band have collaborated in the past on visuals.

Be warned: it’s to be filed under ‘Uneasy Listening’.

Produced by Richard McNamara from Embrace, the new album ‘is more extreme’ says bassist Filthydirty. ‘The long songs are longer; the fast ones faster. We went in the studio without a clue what it would sound like and the songs, all pretty much recorded in one take, formed themselves as we were playing. We had 2 or 3 songs that we’ve been playing live but the others were completely flying by the seat of our pants and that energy and tension has recorded well.’

The album title came from a less than impressed reviewer. The band, ever self-deprecating, take great pleasure in antagonising their crowd to the point that their dedicated following greet live performances with booing rather than applause. One fan, who has the band logo tattooed on his arm, made his own ‘I Hate Evil Blizzard’ t shirts. ‘People pay money to hate us. Win/Win.’

The band are touring the UK for the remainder of 2018, together with headline slots at Beatherder, Sonic Rock Solstice and Jesstival amongst other festivals, with European and Japanese dates being arranged for the future.

The album is available through Cargo distribution worldwide and has a limited edition of 500 copies on premium weight blood splattered vinyl though it should be noted their last album sold out of its initial pressing in under 90 minutes.

The band have famously only ever rehearsed 5 times…

‘Evil Blizzard may be more eligible for the Turner Prize than the Mercury’ – theartsdesk.com

Pre-order ‘The Worst Show On Earth’ at: http://crackedankles.bigcartel.com/