Enter Shikari appear on the cover of the December issue of Playmusic Pick Up this week featuring a revealing interview with the band after their Brixton Academy show.

Ida Maria has just been featured on Channel 4s site who claim All eyes are on her; the girl’s got it
Ida also saw the video for her debut single Oh My God get an exclusive premiere on NME.com .
Get in. 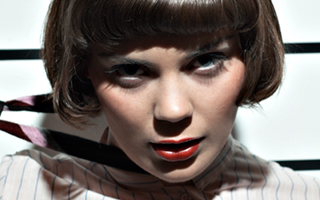 The Welsh metal-core band Bullet For My Valentine has spent most of their existence so far taking over the world with massive U.K., European, U.S. and worldwide tours, sharing the stage with Guns N Roses, Metallica and Iron Maiden, playing the Main Stage at just about every rock festival on the planet, and seeing their 2006 debut album ‘The Poison’ – an album London’s daily The Sun called “One of the finest debut albums in rock history” – sell more than one-million copies worldwide  350,000 in the U.S. alone  a very rare achievement for an emerging band.

Back home, Bullet For My Valentine has graced the covers of the UKs Kerrang!, Rock Sound, and Metal Hammer.  They won Metal Hammers 2006 Golden God Award for Best British Band, and the 2006 Kerrang! Award for Best UK Single for their track Tears Dont Fall.

In 2008 Bullet For My Valentine returned with ‘Scream Aim Fire’, the bands highly anticipated sophomore release.  The 11-track assault was produced by Colin Richardson (Machine Head, Funeral For A Friend) and recorded at Sonic Ranch just outside of El Paso, TX in early 2007, and is, according to front man Matthew Matt Tuck, really melodic heavy metalcatchy, hooky choruses and full-on vocals with the music being very in-your-face and heavyits a lot more up-tempo than The Poison, a lot more aggressive.

Drum and Bass maestro’s Pendulum, who are currently B listed at Radio 1 are now the featured artist at Myspace thanks to the Division online machine. Smoke the bat!

Cover stars ‘Fightstar‘ join Division’s  on-line roster to promote the forth coming single ‘Deathcar’. Look out for their CD/vinyl limited release via Gut Records and you will find the video exclusive for this track on-line today at Myspace.

Psychedelic warlords The Warlocks were reviewed in The Guardian this weekend where their forthcoming Tee Pee Records release ‘Heavy Deavy Skull Lover’ was described as being ‘shrouded in several layers of bleak, angry guitar, buzzing and droning like a swarm of killer bees‘. Look out for their UK tour later this month.

Their happiness soon subsided however when they released that Men Only didn’t actually feature any male flesh at all, only female. But still, these sluts take what they can get. ‘By King Dong’s false dick do they scream,’ says the reviewer who obviously wants a bit…

Not heard of MGMT yet? Oh boy this band are going to have you on your toes this month.

The buzz on this band has traveled from the USA into our office and will be shared online with all those who appreciate amazing music.

Million selling rock band Bullet for My Valentine join Division this week. They return with new album ‘Scream Aim Fire‘ via 20-20/Columbia Records and we are delighted to fuel their online presence.