The self-described “piss-angry metal band“, known for their ferocious live performances and original stamp on the classic power and thrash metal of decades past, formed in 2008 with the aimed to assemble an epically heavy, crushingly loud band that would reinvigorate their love for excessive volume.

Finding inspiration from an array of styles from 70s doom to power metal and 90s black metal, as well as that which informed West Coast hardcore punk and skate culture, Saviours provoke a violent response to all in metal that does not ring true.

Into Abaddon is to be Saviours second album release, but first to their new home at Kemado Records. Produced by Joe Barresi (Melvins, Kyuss, Tool) Into Abaddon was recorded fresh off a red-hot tour of the United Kingdom as hand-picked direct support to progressive metal giants Mastodon and a 14-city road jaunt that saw the inclusion of many of the songs that comprise the new full-length, which will be released January 22, 2008. They tour the UK with The Sword in March 2008. It’s going to be very,very HEAVY.

This band is for the guitar hero in all of us  Base.Ad

Sounds Like Violence blend a melting pot of emotive sensibilities, they roar, wail and gush melody with the greatest of skill. Despite finding difficulty pursuing their musical dreams in and around the small town of Ängelholm, Sweden made them ever stronger, rather than fleeing to the brighter lights, the band stuck to their roots and knuckled down in order to get their show quite literally on the road. These are the boys that will no doubt make hardcore and punk kids strut the dance floor with a new grace and style.

Their 2004 release for Deep Elm introduced the band to the world and inspired gushing praise from the press including an astonishing KKKKK review in Kerrang!

2007 saw the release of their debut full length With Blood On My Hands for Burning Heart Records, combined with a successful UK tour with Fightstar and continuing praise from the press. 2008 could well be their year.

Sounds Like Violences The Pistol was arguably one of the most exhilarating debuts heard in a long time With Blood On Our Hands is the equally black and bitter follow-up.  (Big Cheese)

This album is not some sickly sweet imitation of emotion. No, this is something far more interesting indeed  (Metal Hammer)

THE SWORD has a double office to perform: to destroy anything that opposes the will of its user and to sacrifice all the impulses that arise from the instinct of self-preservation.

THE SWORDs live shows quickly became the hottest ticket in Austin, and in no less than a year after their formation, THE SWORD became known as Austin’s most dangerous band. Soon, an increased number of regional live dates had gained the band an army of followers.  That, combined with a devastating performance at SXSW 2004, led to the band sharing the stage with respected noise heroes like JUCIFER, DON CABELLERO and MASTODON.

Following their much talked about performances the band found a home in diverse NYC label Kemado Records and the bands debut full-length followed. 2006s Age of Winters is a mind-blowing, nine-song journey inside the mysterious, yet concrete world THE SWORD call their own.  Now the band are ready to unleash their debut full-length album ‘God’s Of The Earth‘ on March 17th and will tour the UK throughout March and April. Division are very proud to be bringing you the heaviest riff-mongers currently stalking the earth. The Sword are gonna hack you down.

The Sword may be your next big thing  ( Powerplay) 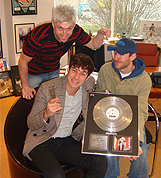 Division’s Head of Online PR Sam Hesketh celebrated with Mark Ronson this week after his online campaign played a big part in the double platinum sales of his ‘Version‘ album this year.

This campaign was built from Hip Hop sites and indie zines through to every mainstream website and ISP across the board and was a huge success.

Both Enter Shikari and Gallows are featured on the homepage of this months Big Cheese Magazine.

It basically sums up a fantastic year for Division, roll on 2008!

Texan riff masters ‘The Sword’ return next March with a new album ‘God’s Of The Earth’.

Go to www.kemado.com for more information.

Hundreds of kids packed into Bay 66 Skatepark last Saturday for the annual Crossfire Xmas Skate Jam. It was the biggest event we have thrown to date and the party was shut down. Look out for the footage this week.

To create a balance of imposing riffs with majestic beauty is something many bands aim to create, but only a small majority actually manage to succeed in accomplishing. The Mirimar Disaster triumphantly belong in the latter category.

Residing in the Sheffield – the of the North – The Mirimar Disaster are rapidly becoming one of the s most intense live propositions.

Signing to Undergroove Records, 2007 marked the arrival of the bands debut self-titled album intending to show people just how sonically challenging music can actually be.

Clocking in at over an hour The Mirimar Disaster insists on captivating the listener with a steady mix of hungry riffs, urgent vocals and a thunderous rhythm section.

The Mirimar Disaster consist of

Proving that even geezer mags can have taste sometimes, Front Magazine have splashed an almighty 4/5 all over the tits of Black Lips ‘Good Bad Not Evil’ album on Vice Records calling it ‘a dirty rock n’ roll album that sounds like it was made by some bikers in a bootleg whiskey factory in 1964.’

We’ll drink to that!