This week’s NME features an ecstatic full page live review of the mighty Les Savy Fav’s recent gig at the Scala in London, claiming that it ‘looks as though that Gig Of The Year contest is well and truly over.’ All we can do is nod our heads in agreement. Truly phenomenal.

We are pleased to announce the addition of Californian psych-rockers The Warlocks to the Division family this week. Their forthcoming album Heavy Deavy Skull Lover on Tee Pee Records is released November 19th alongside a UK tour. Get ready to zone out.

Although new to the Division roster, Californian psych-drone-rockers The Warlocks forthcoming album Heavy Deavy Skull Lover for Tee Pee Records has already inspired NME to express their excitement for the release, placing it high in their playlist this week. They had this to say.

Incredible new album from the LA psych-rockers. Begins with a song called The Valley Of Death and gets even more gloomy from there. Makes The Cures Robert Smith seem like a comedian. (NME)

Already a cult obsession for underground music lovers the world over, The Warlocks are normally shrouded in mystery but with press interest in the band already building at an alarming rate across the board, maybe The Warlocks are ready to come overground.

Dirty psychedelic flower punks Black Lips are already a name on the filthy lips of hip-kids the world over but forthcoming single Veni Vidi Vici and album Good Bad Not Evil (both on Vice Records) look set to propel the band into the mainstream for the rest of us bozos to enjoy.

Recorded in their hometown of Atlanta at The Living Room studios aided by the bands friend Ed Rawls, Good Bad Not Evil ranges from psychedelic blues songs to outright pop hits like Katrina. The albums a fresh, exciting take on the wildest records of bands like 1960s Peruvian punk bands like Los Saicos, The Stones, 13th Floor Elevators and the raw pop exuberance of Cavern-era Beatles. Its probably the most out-there, funniest album youre going to hear all year. Dont sleep on it.

To put bluntly, to not love this song with its esoteric, eccentric lilt; its narcotic slurs its sleazy, fuck your girlfriend so you hear her scream mosey is to be dead  Base.Ad (Single of the Week  Veni Vidi Vici)

They represent the underside of moustachioed Americana, and they are clearly enjoying themselves, like white trash rednecks on a shooting spree.  Artrocker

The ability to urinate in your own mouth doesnt necessarily lead to great albums, but theres more to Black Lips than merry micturation.  NME

Black Lips are Johnny Cash for the noughties.  NME

Such no-frills party punk-blues have been done to death, but these latest uncouth upstarts have tunes to burn Black is back in fashion.  The Observer

The tracks from Good Bad Not Evil gleam  Plan B

So stacked with garage grit and Southern swagger its impossible not to warm to the idea and heartily do the timewarp If you thought the The Strokes debut EP was the lo-fi retro Real Thing you obviously didnt count on this bunch of fucked up yet, conversely, clued up deperados.  Rock Sound

Their rawndirty rocknroll sounds like it was made by some bikers in a bootleg whisky factory in 1964, which makes a nice change from the usual knock-kneed indie weakness.  Front Magazine

Mixing garages crude guitars and scratchy throated delivery with skewiff country, blues and psychedelia, their fourth studio album ignites with the same rapturous energy as the Sonics and the 13th Floor Elevators.  The Guardian

Gay For Johnny Depp are: Marty Leopard (vocals), Sid Jagger (guitar) Fabrizio Coxboi (bass) and JJ Samanen (drums). They are an utterly tasteless and nasty chaotic noise whose love for sheer musical bedlam is almost as strong as their love for Mr Depp.

They are poised to release their debut full-length album The Politics Of Cruelty for Captains Of Industry Records, following acclaimed EPs for both Captains and Firefly Records. Get yourself lubed up and read what the press have had to say about them so far below.

Its bluster, blame and belief rolled up into one spazz-out, fuck-you, fuck-everything, fun-fuck package of bile and strangely compelling head-mashing insanity. And by Christ does The Fly ever love it. – The Fly

Brash, crude noise with an edge that is so raw, you may well have to wear gloves when opening the CD case Ridiculously contagious Spill

Pendulum formed in their home-town of Perth (Western Australia) in 2002, when producers Rob Swire and Gareth McGrillen teamed up with acclaimed local DJ Paul ‘Elhornet’ Harding. While their individual formative roots ranged from producing drum & bass, breakbeat and hardcore, to playing in metal and punk bands, their comparable talents proved an unstoppable force when they managed to single-handedly conquer the world of drum & bass in their first 12 months together.

After selling more than 200,000 units of their debut artist album “Hold Your Colour”, remixing for such respected artists as The Prodigy, being play-listed and featuring regularly on BBC Radio 1, all whilst continuing to tour the world over as DJs… Pendulum decided that was finally time to take things to the next level – performing live.

Pendulum retreated to the depths of the underground to work on their second album, and to hone and perfect their sound for the live arena. Finding that using purely electronic sounds left something to be desired, they fetched their guitars and worked on perfecting their ultimate sound – an electronic Led Zeppelin, a crunked up Soundgarden, Tool meets Timbaland, combined with the synthetic aggression and sonic purity of the original Pendulum sound.

So apart from that, what the hell are Pendulum all about? In the words of the boys themselves…

“We want our music to be an escape. While technology continues to constantly advance production techniques and (arguably) sound quality, something has been lost in the process – that original sense of self-escape, the idea of leaving yourself open to experience something you don’t necessarily find in every-day life. That was the energy we picked up on and liked about electronic music when we first got into it. It felt like the same energy found with bands like Led Zeppelin and even The Beatles, and still occasionally today with bands like Tool, The Mars Volta, Queens Of The Stone Age and others.

To us, it made perfect sense to combine the best of both worlds, but it had to be done in a way that didn’t make it sound obvious. In the last 10 years you’ve had all these bands that tried to cross the bridge by recruiting a turntablist / using a synthesizer on their new single, or electronic artists who just threw an obvious guitar sample into a tune…but eventually it just came across as a gimmick or a bit cheesy. We thought we’d try and do it properly, because to us it still hasn’t been done right and theres a lot of room for exploration.

If you turn on the radio today you’ll hear 20 tracks in a row describing someone’s every-day life, or songs with a one-line catchphrase chorus about shaking your ass in the club – the production is usually great but when you look deeper, there’s nothing behind it…it doesn’t offer you anything past its face value. We want to hear something different and exciting, but the material we want to hear isn’t getting made. Thats why we spend nearly every waking moment trying to create music that takes you out of this universe – for ourselves and anyone else who wants to listen.”

Second album ‘In Silico’ was released in 2008 to an ecstatic response, conjuring a captive audience for the band across the world. They have gone on to play some tremendous live sets and have more than proven themselves as one of the ultimate festival acts of their generation.

Named in tribute to the legendary Rolling Stones guitarist and his influence in introducing Eastern culture into the world of Western rock and roll, The Brian Jonestown Massacre have made some of the most exciting underground music in America since the sixties. Formed in 1990 in the Haight-Ashbury district of San Francisco, The Brian Jonestown Massacre is very much an amalgamation of that citys past and present musical forces.

Some 40 different members have passed through the group’s ranks since its inception, but the heart of the BJM is the ragged determinism of Anton Newcombe  producer, songwriter, guitarist, singer and the group’s primary creative force.

Having now reach legendary status due to their part in the classic Dig film and the bands constant touring, Division have promoted a series of reissues for the band alongside their live schedule and look forward to working their new album My Bloody Underground early 2008.

Having previously played together as Shabutie, Coheed and Cambria officially formed in New York in 2001. The band embrace a fusion of progressive and emotional rock along with highly conceptual album themes. Vocalist/guitarist Claudio Sanchez, guitarist Travis Stever, bassist Michael Todd, and drummer Joshua Eppard issued their group’s full-length debut, 2002’s ‘The Second Stage Turbine Blade’, on well respected indie Equal Vision Records. The band toured extensively for more than a year in support of the album, which was created as the second installment (although the band’s first release) of a five-part fictional saga about the doomed marriage of two characters, Coheed and Cambria, whose children may or may not be infected with a serum whose power can destroy the universe.

Coheed and Cambria released ‘In Keeping Secrets of Silent Earth: 3’ in 2003. This third part of the five part series received some support on the likes of MTV and Coheed and Cambria subsequently toured North America with Thursday, Thrice, AFI, and Rainer Maria. They also joined the tenth annual Warped Tour in summer 2004 and embarked on their first headlining European tour. These exciting events stirred the band to return with ‘Good Apollo I’m Burning Star IV, Vol. 1: From Fear Through the Eyes of Madness’ in September 2005; the album (part four) was also the first installment of a two-part conclusion to the band’s running sci-fi story line.

Both bassist Michael Todd and drummer Josh Eppard ended up leaving the group in 2006. With Todd actually returning to the band and the temporary enlistment of Foo Fighters drummer Taylor Hawkins, the group began recording their fourth album, ‘Good Apollo I’m Burning Star IV, Vol. 2: No World for Tomorrow’. The group’s lineup was soon cemented with the addition of ex-Dillinger Escape Plan drummer Chris Pennie, and the album was released in October 2007.

The absolutely crushing force that is Swedens Path Of No Returns debut album The Absinthe Dreams on Burning Heart Records has already inspired gushing praise from the more extreme end of the UK press.

And its hardly surprising they fell in love so quickly as Path Of No Returns jagged metal baptized in hardcore is hard to ignore. They play with baffling tightness and insane technical proficiency complete with hook lines that will reel you in like shoals of wet flappy fish. Heres what others had to say!

They kick up a scorched, apocalyptic racket that could leave your ear cannels scarred. – Kerrang!

They will tear into your room, grab you with 8 fists and scream at you at point-blank range! – Alternative Ulster 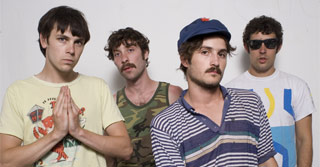