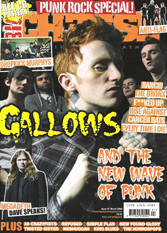 Gallows hit the cover of Big Cheese Magazine this month for their Punk Special.

The UK tour with Fucked Up is on fire. Click here to see some footage.

After 12 months of taking care of Mark Ronson’s online pr, watching him go double platinum and seeing his rise to fame from scratch, all of us here at Division are proud to see Mark pick up a Brit Award this week for Best Solo Male Artist.

‘Forget the Year Of The Rat; after 13 years of toil, welcome to the Year Of The Fav,’ says NME’s Greg Cochrane of Les Savy Fav’s recent NME’s Brats show at the Astoria in London.

Hailing from the idyllic small town of Hollis, New Hampshire, newcomers to Epitaph Our Last Night have arrived as the fresh new face of rock with their explosive debut, The Ghosts Among Us.

Our Last Night formed in 2004 as a result of a few highly gifted friends who knew automatically that music was their calling. The group self-released their first EP, We’ve Been Holding Back, while they were still in high school. The group immediately began attracting fans throughout New England with their ferocious live shows. By the following July, Our Last Night had already recorded a follow-up EP, Building Cities From Scratch, which attracted the attention of several record labels. After a few lineup changes, the group was complete in 2006 with Trevor Wentworth (vocals), Matt Wentworth (guitar/vocals), Colin Perry (guitar), Alex “Woody” Woodrow (bass) and Tim Molloy (drums). In early 2007, the group signed with Epitaph Records, the day before they embarked on their first tour.

In the autumn 2007 Our Last Night entered the studio to record their debut full-length album, The Ghosts Among Us. Teaming up with famed producer Steve Evetts at Omen Room Productions(Senses Fail, Every Time I Die), the group began creating their dynamic new album.

Our Last Night Are:

Swedish punks Millencolin join Division this week for print press and online pr. Look out for ‘Machine 15‘ their new album and first release in three years out on Burning Heart/Epitaph.

Our man Eugene Robinson-you know him as the dude who choked you out at the Oxbow show-has been threatening to write a fight book for some time now, and the good folks at HarperCollins finally told him to put his mouth where their money was.

The result is FIGHT: Everything You Ever Wanted To Know About Ass-Kicking But Were Afraid You’d Get Your Ass Kicked For Asking, a black-eyed, split-lipped, bloody-knuckled journey into the black heart of the fistic arts-from Ultimate Fighting, underground fight clubs and kickboxing to soccer hooliganism, vicious “rock n’ roll” prison-cell combat, and good old-fashioned bar brawls.

The best part is that Hydra Head managed to convince him (actually, it didn’t take much convincing) to record an audio version of FIGHT for release on 2xCD.

The tapes play out like Ray Liotta’s voiceover from Goodfellas transposed across a series of merciless, technically proficient beatings-only without all the messy coke scenes and, like, antipasto.

Minnesotan hip hop kingpins Atmosphere have joined Division in 2008 to bring some rapping flavour to the roster for the release of their upcoming sixth studio album ‘When Life Gives You Lemons, You Paint That Shit Gold‘ on Rhymesayers Entertainment.

Rapper Slug and production maestro Ant, both from Minneapolis, have been combining their skills for over 10 years and have earned the tag of one of the hardest working acts in hip hop. With non-stop touring and a flurry of self-released tapes and CDRs, Atmosphere have put the Mid-West on the map.

The duo will be dropping their latest record in April and look set to bring in fans from all across the musical spectrum, especially after having spent some time on the Warped Tour in the past and with over a million records sold in their career, the new album is sure to continue their march towards greatness.

‘UnonoU’ is to be the second full release from Danava through Kemado Records.
Portland, Oregons, Four-piece Danava explain that UnonoU is a word I made up, says lead singer Dusty Sparkles. People should think for themselves [as to its deeper meaning]. I hate being specific. Its boring.
Whats not boring is much of anything about Danavas densely-packed musical ideas and unstoppable live show, which kick down the doors of genre, clique, and scene.

Although Danava (pronounced DON-UH-VUH) play the type of ferociously intense, foundation-rattling, rock and roll that might righteously justify some good old fashioned head-banging, vocalist Dusty Sparkles wants you to know that he doesnt consider his band a metal outfit.
Sparkles has as much use for genre tags as folks on the Titanic did for bottled water.
Danava reaches back to the whole of a musical history beyond metal, and fuses the results into a cohesive end result. Its hard to stand out, Sparkles confesses. What matters to us is that we can say were doing our own thing.

“Danava will be your new favorite band, get used to it.” – Rock Sound

Danava are both geniuses and madmen. Their retro yet spacey rock sound will confuse many but when it lands it the right hands Well I imagine youre going to rock like never before. – Powerplay

Danava are a retro-futuristic voyage into an apocalyptic nightmare world where light is dark and weird is normal. – Kerrang!

This will blow your mind. – Metal Hammer

Deserves its own award for merry insanity.  Plan B

Bostons 5ive (not to be mistaken with the English boyband, oh no no no) are a psychedelic doomcore band, consisting of only two mighty members  Ben Carr and Charlie Harrold.

After seven years of relative anonymity, they are back to grace us again with both their presence and a picture perfect new record, which serves as a frame worthy summation of the band’s past impressions and conceptual progression. Hesperus is to be their new full length release, which will be out March 24 2008 through Tortuga Records.

Produced by Grammy nominee Andrew Schneider (Cave In, Daughters, Scissorfight), these seven tracks will send you silently swaying into a somnambulant state and then abandon you still stirring and stark naked in a roomful of uncomfortable silence. 5ive, longstanding purveyor of the recently popularized metallic twosome, has, with Hesperus, generated a centripetal force to be reckoned with.